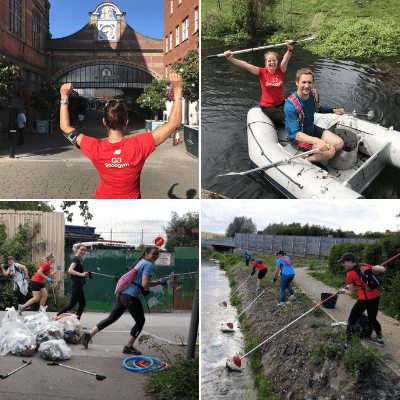 Volunteers in the Local Community

GoodGym is all about combining health and fitness with helping out the local community and doing good deeds.

It is a not-for-profit company and offers support by helping charities and local organisations with practical tasks. Members of the GoodGym Windsor and Maidenhead community sign up on a drop-in basis to sessions. They can get involved with everything from volunteering at foodbanks, to litter picking or helping isolated elderly residents. Volunteers do not have to commit to more than they can manage, and they in turn see benefits to their mental and physical health. 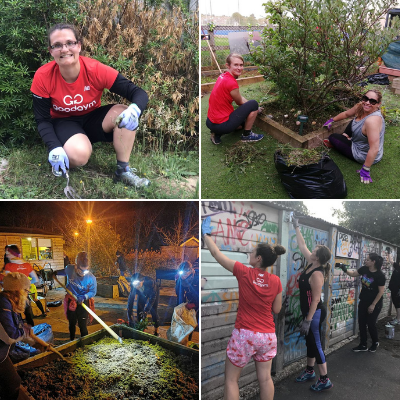 By pulling together to help out charities and the community, members can find great job satisfaction and sessions provide a brilliant way to network with people in their hometown and make new friends. Getting out and meeting people in this unique way is very motivating for members and of course the support is also greatly welcomed by those who need it.

Why is it ‘GoodGym’?

Helping in the community is a good thing to do, but why the gym? Members are encouraged to get fit by running, walking or cycling to and from tasks. Plus there are optional running challenges and group fitness sessions too.

The idea is to get fit by channelling energy into something positive. Rather than going to a traditional gym, members are motivated to get fit whilst going out and giving their time.

It is social and fits around busy lives. Plus it can suit those who prefer not to run. It is about enjoyment and everyone is included. 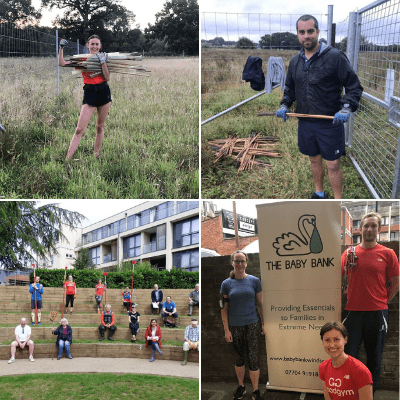 GoodGym in Windsor and Maidenhead

Following its pilot at Tower Hamlets back in 2008, GoodGym has grown and now operates in 58 areas of the UK.

More recently, it has come to Windsor and Maidenhead and is run by Amy Lovell from Maidenhead.

Amy is a local mum and fitness instructor and urged GoodGym to come to the local Borough. She was aware of what they do and wanted to get involved. The launch in February 2020 was a huge success and they have made it work during the pandemic.

In 2020 alone in Maidenhead, they have helped out at a Community Allotment, sorted items at the Baby Bank, painted fences, helped schools, and even helped baby toads across the road on Blackamoor Lane!

This supportive group is all about community spirit and being sociable too. If members choose to be involved in group runs or running challenges, it’s done at their own pace without feeling the pressure to compete.

There are a growing number of members in the area – some who volunteer every week and some who can only commit occasionally. However GoodGym Windsor and Maidenhead are always looking for more people to join the team.

GoodGym hopes that members will be motivated to get fit by helping others. More so than they would be going to a gym, and helping someone who is lonely or focusing on a project doesn’t need to take up a lot of time. Making it possible to stick with it for the longer term.

How long have you been involved with GoodGym?

I first heard of GoodGym’s work in London in 2016 and wrote to them in 2017 urging them to launch in Windsor and Maidenhead. Nothing came of it at the time, which didn’t bother me too much because it was soon after that my twins were born. Late last year (2019) I was thrilled to hear (through the wonderful Maidenhead Parkrun) that GoodGym was coming our way. I successfully applied for the job of leading the area.

You lead quite a busy life with your family and work commitments. How much time are volunteers expected to put into GoodGym?

One of the best things about GoodGym is that volunteers can do as much or as little as they like. Some people join in activities a few times a week, but others come once or twice a year when other commitments allow. Or when they see an activity listed that particularly appeals to them. We have an activity listed every Wednesday evening, but we do other odd evenings, daytimes and weekends too.

If someone wishes to volunteer and become a member, but cannot manage to do it regularly, can they still join?

Yes, 100%. As a GoodGym member, you get the red GoodGym t-shirt, you are supported to reach your fitness goals, and you can get involved with GoodGym activities. Ranging from ‘Community Missions’, where we work in groups to help out charities and community projects, to solo missions to help isolated older people. As a member you are invited to make a monthly donation to GoodGym, but this is completely optional.

As GoodGym is all about helping the community and strong team work, have you found the members commit to this more than going to a regular gym?

Yes, definitely. Knowing that you’re going to be making a difference to a project or isolated individual in your community is great motivation to put your trainers on and head out the door. The atmosphere in our group sessions is also very relaxed and sociable, so even though you’re working hard it doesn’t feel like hard work.

I am not a runner, can I still do GoodGym?

Absolutely. We encourage members to use the power of their legs to get to and from GoodGym activities. For many members this means running, but we also have lots of members who walk, cycle, and occasionally drive. If running is an essential part of a session this is made clear on the listing before you choose to sign up, and even then we welcome any pace and always have a back-marker so no one is left behind.